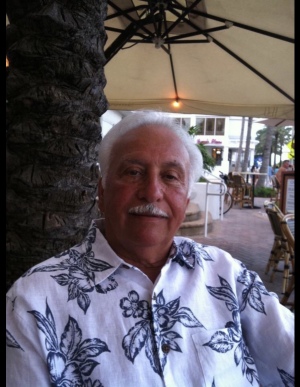 Nigel Paul Montaño, 74, peacefully passed away with his kind beautiful smile on his face, on Wednesday evening, October 23, 2019 in his home surrounded by his loving family after a three year battle with Progressive Supranuclear Palsy (PSP) a very rare neurodegenerative disease; never once complaining about his condition…a perfect patient.

He was born November 13, 1944 in Taunton, Somerset, England to his parents Paul S. and Muriel (Thatcher) Montaño and was the eldest of five children, two brothers and two sisters.  Nigel traveled for two weeks, to the US after World War II, at the age of one year and three months with his British mother and baby brother Tony on the Queen Mary, along with thousands of other British mothers and their children (he won the most beautiful baby award on the ship) to join his father in New York and then traveled by train to their new home in Grants, New Mexico.  His family moved next door to his Aunt Tonia, Uncle Vidal, Tata and cousin Luisa; and so, began a loving and close relationship with them from the day they arrived and lived with them till the age of six when he moved with his parents to Albuquerque to start school.   He would go back every summer, where he learned the life of ranching from his Uncle.   Nigel learned at an early age he would have to work hard to attain all the goals he set for himself and had a strong work ethic which was instilled by his father and passed along later to his children and others he influenced throughout his life.  At the age of 12, he offered to sweep floors at a neighborhood store for payment towards a bottle of Nehi Orange soda and a Flip pie.  His employer was so pleased with his work and soon began to pay him; he saved his money and bought his first fancy bike.  Nigel’s work ethics were very important to him at a very young age, therefore he set many goals throughout his life and successfully met them all.  He graduated from Rio Grande High School in 1962 and shortly after started his first adult job as an electrician.

Nigel met the love of his life, Edna, July 21, 1962 and later married her on February 27, 1965; they started their family a few years later and was a devoted father to their two children, Michelle and Nigel Paul, Jr.  Family meant everything to Nigel, he was a provider like no other and was so very proud of the five homes he built for his wife and children.  He was an accomplished electrical contractor and business owner, opening his first business in 1977 and retired in 2011 from his last business Elite Electric.  His success was due to his outstanding work, his ability to make others feel at ease and his honesty; so genuine that many times his business dealings were based on a handshake and everyone always remembered his “English” name. He volunteered at his children’s schools, held several positions on the school board as well as other business boards and served in the Army National Guard for 6 years.  He enjoyed Thoroughbred horse racing, and so began his new hobby as a racehorse owner for over twenty years.   This hobby allowed him to learn the art of buying, breeding, racing and most fun of all Winning!   He loved life and spending time with his children and granddaughters, sometimes just sitting back (with his toothpick in his mouth) and taking in all that was going on around them, ranching, farming, hunting, camping, traveling and cruising.

Services for Nigel will be held at Nativity of the Blessed Virgin Mary Catholic Church at 9502 Fourth St NW, Albuquerque, NM 87114.  Vigil Service Tuesday evening, November 5, 2019 at 6pm and Funeral Mass Wednesday morning, November 6, 2019 at 9am.

For those who inquired about flower delivery they may be sent to the Nativity of the Blessed Virgin Mary Pastoral Office between the hours of 9:30-4:30pm (M-F) located at 9502 Fourth St NW, Albuquerque, NM 87114.

To send flowers to the family or plant a tree in memory of Nigel Montaño, please visit our floral store.